PM condemns all forms of violence against children 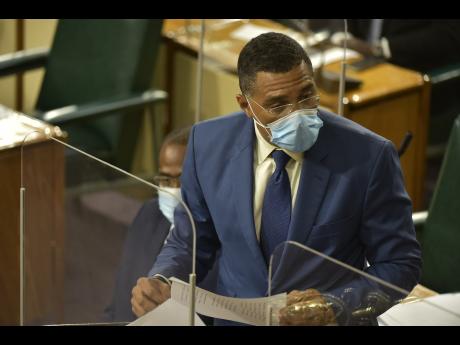 Prime Minister Andrew Holness, speaks in the House of Representatives on Tuesday (July 20).

Prime Minister Andrew Holness, is condemning all forms of violence against the nation’s children.

The Prime Minister was speaking in the House of Representatives on Tuesday (July 20), where he addressed the case of Nashawn Brown, a four-year-old who was severely beaten by his stepdad. He subsequently died.

Holness said the incident has again brought to the fore the plight of the nation’s children, who continue to face physical, sexual and emotional abuse from adults in their lives who are meant to protect them.

“We continue to be horrified by reports of violent and cruel acts being meted out to children. This should not be tolerated. In the same way we have addressed and condemned other forms of violence, we must unequivocally, loudly, and resolutely condemn violence against our children. We could not allow this scar on our society pass without the Parliament condemning it,” he emphasised.

Reports are that the child complained of not feeling well and was eating slowly when his stepfather became angry and proceeded to beat him with a stick.

The suspect is in police custody and has been charged with unlawful wounding, assault occasioning actual bodily harm, cruelty to a child and child abuse.

Holness pointed out that following the post-mortem report, it will be determined what other charges will be brought against the stepfather.

The Prime Minister said that physical abuse remains one of the main and overt forms of child maltreatment reported to the Child Protection and Family Services Agency (CPFSA) National Children’s Registry (NCR).

He noted that each year, approximately 25-30 per cent of reports received are for children who are victims of some form of physical violence.

For the first half of 2021, the NCR received 1,465 reports of physical abuse, representing 26 per cent of the 5,561 reports of child maltreatment received during the period.

Holness said it is important for Jamaicans to have a conversation about the effects of corporal punishment.

He noted that children’s brains develop the most in the first few years of life, mostly in the early-childhood period, zero to six years.

“I have been saying this for more than a decade. We, as a society, must ban corporal punishment. Our local research suggests that boys who are severely beaten by their mothers gravitate to a life of crime,” he added.

Persons can report incidents of child abuse to the CPFSA.

It is an initiative of the Office of the Children's Advocate (OCA), Private Sector Organisation of Jamaica (PSOJ) and United Nations Children’s Fund, (UNICEF) and is operated by the OCA.