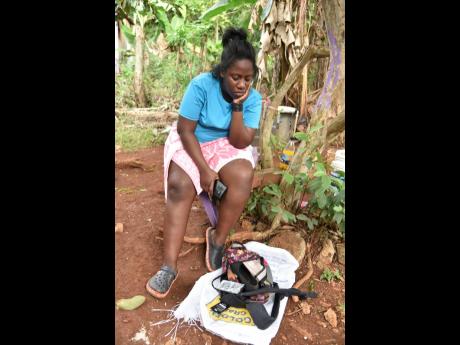 Philandra Tyrell looks at the belongings of her mother, Philandra Haye. The items were retrieved from a section of Washington Boulevard in St Andrew where Haye was hit by a motor vehicle. She died as a result of the injuries. 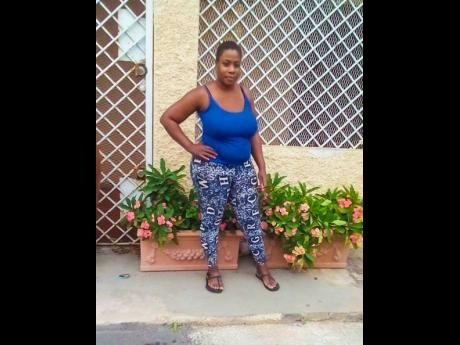 A mixture of grief and anger gripped Philandra 'Renae' Tyrell as she mourned the sudden death of her mother, Philandra Haye, who was killed in a hit-and-run motor vehicle incident yesterday.

The 42-year-old Haye was mowed down in the morning along Washington Boulevard in St Andrew.

As Tyrell - the first born of Haye's two children - sat with a group of women in her yard in Belvedere, St Andrew, she wept and questioned why the driver of the vehicle didn't assist her mother as she laid bleeding in the street.

"Him left her to die like a dog in the street. God nah sleep, how can someone be so heartless fi just like down mi madda and nuh stop? Who knows, probably she wouldn't have died same time. Yuh lick down the woman and yuh nuh just pick her up and carry her go hospital. No one else except the police took her up. Persons stop and made videos and left her on the ground," she said between sobs.

According to a report from the Corporate Communications Unit, at 6:30 a.m., Haye was walking along the roadway when she was hit by a motor vehicle that sped away. The police were contacted and she was assisted to hospital where she was pronounced dead.

Tyrell said her mother worked as a caregiver in a nearby community and was on her way to work when she met her demise. She said she last spoke to Haye on Tuesday. At that time, Haye told her that she would be visiting a friend in the Washington Boulevard area.

"Normally, when she reach work she would call us to let us know, but this morning (yesterday) I didn't hear anything. After that my father called me and told me that he heard that a car hit her, and I told myself it wasn't true. I called her but the phone went straight to voicemail. I just couldn't believe," she said.

Tyrell described her mother as a hard-working individual who put the needs of her family first.

"Mi nuh know how mi a guh live without mi mada. She a mi everything. Mi mada try har best and she always have we back. She miserable when she ready, but she love me and mi sister. How we a guh manage without her?"

The distraught daughter is pleading with the driver of the vehicle that hit her mother, resulting in her death, to turn himself over to the police.

"I am just asking anyone who saw or know anything to report it to the nearest police station. To the driver, mi know seh yuh know yuh do something wrong and mi know yuh know the consequences, but you could have at least take up mi mada. Yuh never haffi left her on the road to dead," he said.

"How yuh expect mi and mi little sister to survive? How mi a guh live without mi mada? Mi nuh know," she added.