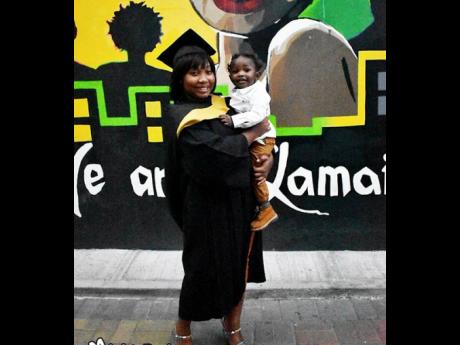 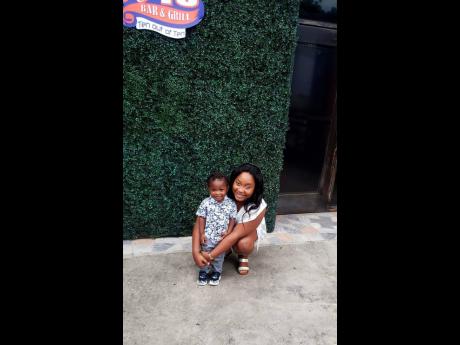 Edwards said that she was determined to finish her degree for her son.
1
2

It was a period of hardship, joy and pain for Lehanna Edwards when she found out that she was pregnant at age 21 during her final year at the Excelsior Community College.

Still, the young mother refused to give up and rather than drop out, she worked two jobs, Sunday to Sunday. During the week she was a data validation officer at a shipping port, and did promo work on weekends. Amazingly, she was back in school three days after giving birth to her son.

"I knew I had to finish not only for myself but for him. It was hard but I was determined because I had to prove to myself that it's not time to give up and show people that I am able to overcome anything," said Edwards, 24, who is now a data validation officer and holds a bachelor of science degree in marketing. Edwards said that she went to school for the full nine months of her pregnancy.

"I had him on a Friday and my next class was the following Tuesday afternoon and I was at class because I was determined. Course works were being issued, I had deadlines and the work needed to be done," said Edwards, who graduated in 2020. Edwards told THE STAR that although she did not see her pregnancy as a burden, the reaction from some persons caused her to feel discouraged and alone at times.

"I somewhat felt like the world had turned on me and people at school started to scorn me and persons that I considered friends wouldn't even talk to me, and instead of asking me what's going on they would ask somebody else. But despite everything, I didn't respond, not once, because I knew what I wanted and they weren't going to stop me getting it," said Edwards.

She also said that she received many discouraging comments from relatives, but abortion was not an option.

"People would say to me 'Yuh not going anywhere' or 'How yuh fi have baby and yuh nuh have nuh vehicle? Yah guh pan bus wid yuh big belly.' They even asked if I knew who the father of my child was. But still, I never commented on what they said because in my eyes I was bigger and better than that," said Edwards.

She said that despite all the negative comments, she received support from her mother and the father of her child, and both are still playing a major role in her two-year-old son's life. She also told THE STAR that being a young mother is not easy and has affected her financially, emotionally, and physically. However, she still believes that young mothers should see their children as motivation.

"Don't listen to the negatives that people say to you about not becoming anything or that your child is a setback. They are not a setback, to me they are motivations. Not saying that you should go out there and put yourself in the situation but if it does [happen], you should be able to look at the brighter side of it. You're no longer thinking about yourself, you're thinking about a child now and that child is going to look up to you, to say that my mom still accomplished what she needed to accomplish. She didn't put anything on pause because of me and still achieved what she wanted," said Edwards, who intends to own and operate a daycare in the future.