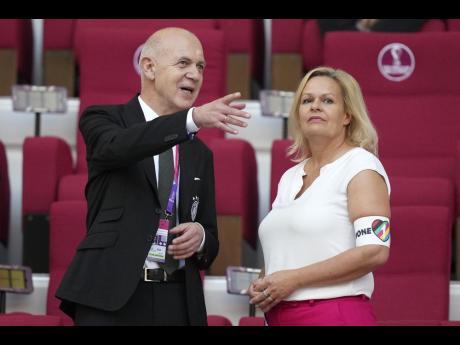 PARIS (AP) — France’s sports minister has encouraged her country’s World Cup team to make a symbolic gesture in support of human rights, after FIFA’s clampdown on the “One Love” armband.

“Is there still a way our French team can continue to express its commitment to human rights? The answer is yes,” Amélie Oudéa-Castéra told French television channel Public Sénat. “The Germans showed it.”

Germany’s players covered their mouths for the team photo before their opening World Cup match on Wednesday. The gesture was a response to FIFA’s effective nixing of seven European teams’ plans to wear armbands that were seen as a rebuke to host nation Qatar and its human rights record.

French players will be “free to express themselves,” in the coming weeks, Oudéa-Castéra said. “They share these values too ... and it’s important that they represent them.”

The French team released a statement before flying to Qatar, saying the players supported NGO’s working to protect human rights and that all the players and staff members had made a collective donation toward them.

“The players have already made a statement saying how we feel,” France midfielder Matteo Guendouzi said Thursday in Qatar. “We’re not indifferent about this situation. But we’re here to play football and enjoy ourselves on the field.”

Forward Marcus Thuram said he respected what the Germans did.

“As Matteo said we have done something (with a donation),” Thuram said. “If they think they defended a good cause then that’s a good thing.”