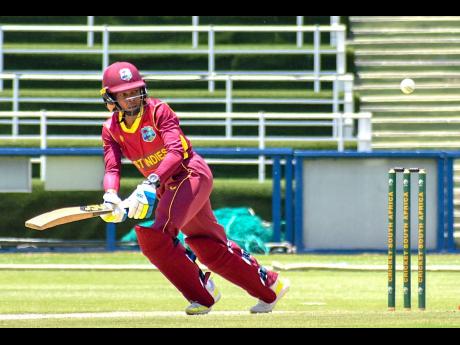 Shemaine Campbelle gathers runs during her top score of 42 against a South African XI in Johannesburg yesterday.

West Indies women made a winning start on their tour of South Africa by defeating a South African Women's XI by 53 runs in their warm-up match at the Imperial Wanderers Stadium in Johannesburg.

Electing to make first use of the pitch, West Indies Women posted a moderate 202 all out from 46.5 overs, with wicketkeeper Shemaine Campbelle top-scoring with 42 off 48 balls, which included five-fours.

Jamaican opener Rashada Williams was her usual sedate self, scoring 30 off 73 balls, which included three fours. Kycia Knight chipped in with some useful runs in the middle order, getting 21 from 35 deliveries, while skipper Stafanie Taylor weighed in with 23 from 27.

Jamaican all-rounder Chinelle Henry also made her mark towards the back end of the innings, getting 22 off 16 deliveries with three fours and a six.

Nadine de Klerk was the pick of the bowlers for South Africa Women's XI with three for 27 from her seven overs.

The South African XI found runs hard to come by following some tight seam bowling from Cherry Ann Fraser and Shamilia Connell who stifled their innings with three and two wickets, respectively.

Fraser orchestrated a middle-order collapse in her spell, finishing with three for 11 from four overs, while Connell wrapped up the innings with two for 13 from two overs.

Tazmin Brits and Delmari Tucker top-scored for the South Africa Women's XI, with 32 and 24, respectively.

With consistency being the mantra for head coach Courtney Walsh, the win was a good start ahead of the crucial four-match one-day series against South Africa's senior women's team.

"I thought the girls did well, it was good to get out in the middle and play today. We haven't played a lot of cricket of late so even though it was a practice match, the atmosphere and the execution went pretty well. What I was most impressed with were the two Super Over practice scenarios we had as well, with how precise and good the execution was. This win will give us confidence going into the series and also for the World Cup."

The West Indies will return to the Imperial Wanderers Stadium on Friday, January 28 for the first of four one-day internationals against South Africa Women. The day-night fixture begins at 7 a.m. ( Jamaica time).