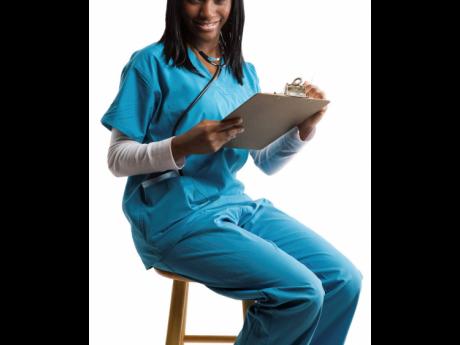 I am 21 years old and I have two children. Their father is 40 years old. We are planning to get married. I am out of school, but I want to go back to school because I love nursing.

But this man does not want me to become a nurse. He is saying that the work is too dangerous and I should do something else. But this is what I wanted to do from the time I was younger. He does construction work and he is always saying that he can take care of me, so I don't have to worry myself about getting a profession.

It is true that he can take care of me because he has been doing so since I was 16 years old. He took me from my parents when I was 18 after I became pregnant at 17. He has never hit me and whenever I tell him that I am tired, he tells me to rest.

We live in a big house. This is his place. I always wonder what would happen to me if he became ill. The children will not suffer because he is making provisions for them. But I would like to become a nurse and I would like to do so before we get married. All he is talking about is getting married. I have never cheated on this man. If you were to see us together, you would think that I am his daughter because I am 19 years younger than he is. Don't you think that I should threaten to leave him if he doesn't allow me to go into nursing? I told him that it is unfair to not allow me to do what I want to do. He is using COVID as an excuse. Tell me what to do.

This man might not be using COVID as an excuse. What he might be doing is trying to control you totally. He has been controlling you from the time you were 16. He is endeavouring to tighten the screws, so to speak. He is 40 years old and he might believe that if you were to become a registered nurse, you would leave him because you might be able to support yourself and would not have to depend on him for everything. So you might leave him eventually. So, fear might be a big problem that this man might be having. Whatever might be his reasons for not wanting you to go into nursing, you should try to convince him that it is wrong for him to prevent you from pursuing a career.

Try your best not to get pregnant again and apply to nursing school. I wish you well.

Other Tell Me Pastor Stories